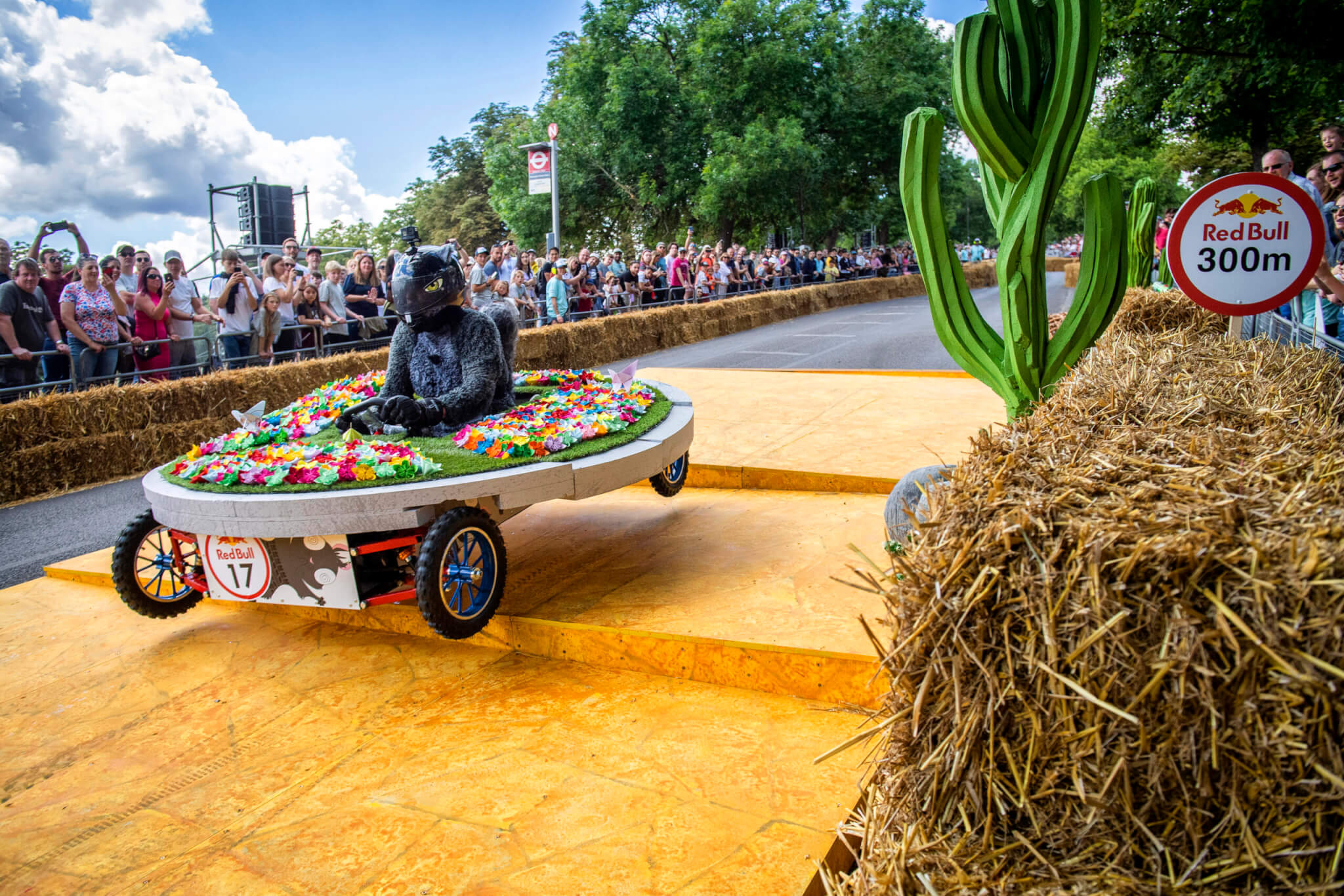 What an amazing weekend for TPS and EML as our team “First Time Around” raced down this years Red Bull Soapbox track at Alexandra Palace, London.

What is the Red Bull Soapbox Race?

The Red Bull Soapbox race consists of multiple amateur teams, designing, building, and traversing down a course in gravity powered soapboxes with many obstacles, jumps, twists, and turns, in a race to the finish line. The race is scored according to these three categories: creativity; score given for the design and build, performance; score given for the dance/routine at the start, and time; score given based on the time it took to get to the end of the finish line.

Our team consisted of six team members, whom are all a part of the EML and TPS family, that came together, working as a team to produce our very own soapbox dedicated to our town’s history!

Our main builder Luke designed and built our kart. As our CAD technician he used his extensive knowledge of cars to build the soapbox using recycled materials, such as metal off-cuts from EML and TPS, to produce the main chassis that would get us to the finish line! Emily is our expert crafter, who used her creative skills to construct all the origami flowers, all 700 of them, with a total of over 30,000 folds! Her amazing origami skills gave our round-about its beautiful bright colours, an essential for creating a show-stopping soapbox. Clive was our team captain, and the main leader of the project, from assisting building the kart, to assembling the soapbox’s decorations, to driving us to the finish line!

Lucia our digital design expert, she produced all our fun social media content, from behind the scenes of building the chassis, to fun TikToks keeping viewers guessing… who was the Stig?! In addition to designing the digital prints displayed all on the soapbox, and signs held up by the crowd. Richard was the man with the idea, as an avid Red Bull Soapbox fan he thought it was worth a shot to enter this year’s race in London! Alongside Jason they made up our ‘muscle’, to push the soapbox at the start after our amazing performance.

As we’re a Letchworth based company our design was focused on our local town – it represented the UK’s first roundabout, which is based here in Letchworth the UK’s first Garden City. We as a team wanted to celebrate our towns history and pay homage to what its known for, black squirrels and a roundabout. It can’t get much more Garden city than that!

Being a retail display company providing in-store solutions, we were able to use recycled materials for the kart, like metal off-cuts, to produce the chassis; in addition to using our manufacturing practices to produce a realistic replica of the UK’s first roundabout. We used our in-house art working and printing facilities to create our soapbox graphics. Our CNC machine cut our ply bodywork alongside engraving our team names into the wood framework, for a personal touch. The poly-cutter was used to cut our roundabout shape out of polystyrene, and our zund machine cut our foamex “UK’s first roundabout” sign.

” This is the most British thing to do… a roundabout! “

On the 3rd of July 2022, “downhill speed-demons unite for the most creative event in the non-motor-racing calendar!” [1] An estimated 20,000 soapbox fanatics flocked together for this years Red Bull Soapbox race at Alexandra Palace, London. With 70 amateur teams competing in this year’s race, our team ‘First Time Around’ were one of the few selected competitors of an estimated 2,000 entries, with the unique design of a roundabout themed soapbox it stood out from the crowd. Some members of the public described it as “the MOST British thing to do… a roundabout”, which was fitting as they raced down the track with a celebration of the Queens Platinum Jubilee on the back of the wacky soapbox.

First Time Around recorded a speed of 27mph and a finish time of 45 seconds, they were 22nd fastest down the track, and placed them 33rd amongst their competitors. Team Go Go Gadget were crowned as this year’s soapbox winners, reaching a speed of 35mph!

We’d like to thank everyone at Eml Retail Display Ltd and TPS Visual Communications Ltd for coming together to make this happen! All your hard work and dedication to the project paid off placing us 33rd in the competition for our first year entering! We’re extremely grateful to be part of the selected 70 competitors for this year’s race and it’s a huge achievement to be chosen out of the thousand’s entries!

It was amazing to meet all the remarkable teams on the day and the sportsmanship shown amongst the teams was brilliant, our team First Time Around were able to provide aid to other competitors by helping to repair their karts with our tools and tape. And all teams cheered one another on from the pits! And a HUGE thank you to everyone who voted for us for the ‘People’s Choice Award’ and an even bigger thank you to everyone who cheered us on in the crowd on the day!

What did you enjoy most about this years Red Bull Soapbox race? Let us know below…

Having traded for over 25 years, EML has quickly become one of the UK’s leading retail display providers. We take pride in the supply and manufacturing of high quality point of sale products, all at great value for money. Our investment in new technology and machinery has enabled us to produce leading edge bespoke point of sale solutions.

Everything in your first order

BLACK FRIDAY OFFER: 20% OFF EVERYTHING. USE CODE BLACKFRIDAY AT CHECKOUT

0
0
Your Basket
Spend another £100.00 for free shipping
Your basket is emptyReturn to Shop
CONTINUE SHOPPING
Calculate Shipping
We use cookies to ensure that we give you the best experience. If you continue to use this site we will assume that you are happy with this.Accept